💕Read this story if your child is taking PSLE this year

Patricia’s daughter entered Primary School on a good note, and initially does well in P1 to P4 math.

However, something terrible happens in P5.

From a usual A every semester, it suddenly became a B or even occasional C!

So Patricia frantically sign up for a math tuition centre,

The first one didn’t get any results, her daughter’s grades continued stagnating.

Patricia switches centres… maybe even at their 3rd centre by the time it’s close to PSLE.

But still, it’s not at the improvement level they want. It almost looks too late and chances are her daughter will not be getting her well-deserved A* for PSLE Math.

Plus, getting her tons of assessment books doesn’t help either, it’s either undone, or done but results don’t change at all.

At this point, Patricia realised that something MUST change. Improvements are still not here after 3 months, 6 months or even 1 year later.

Thankfully, when I started helping her it was around March/April, and there was still 5-6 months of work we could put in.

Patricia’s daughter joined some of my classes, more importantly she used some of my books and started to teach her child to practise correctly.

And voila — her daughter’s grades finally started improving… and she managed to jump from B to A* for PSLE!

So why does this happen?

What changed in the way her daughter approached and practised Math that led to immediate results?

I’ll be sharing the 3 factors that prevent B students from scoring A*.

To your child’s success, 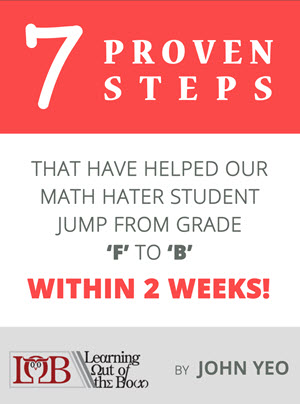